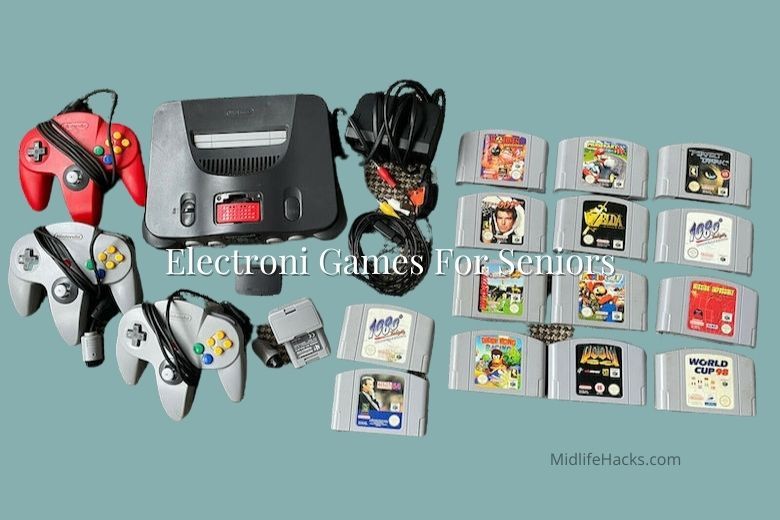 Estimates differ but there are over 2 million video games available either to play on your smart device or on a purpose-made device. This article will take a look at 9 of the best electronic games for seniors.

Hopefully, there’ll be something on this list that will be enjoyable and suitable for the mind and body.

Did you know that over 50 million people over the age of 50 now play games?

What used to be almost exclusively the domain of adolescents is now being shared with the aging population, and seniors are reaping the cognitive benefits.

This article includes affiliate links. If you choose to purchase any of the products we have discussed in this article, we may receive a small commission with no additional cost.

Wii Sports is commonly cited as an excellent game for seniors. That’s because it’s affordable, easy to set up, and lots of fun to play alone or with friends.

Wii Sports is played on the Nintendo Wii console, an older console, but is still available on Amazon.com which you’ll need. The machines are “renewed”.

Nintendo Wii came out in 2006 and the original bundle came with WII Sports. However, if you buy a console you will need the Wii Sports as well. There is a bundle that includes the console and the software. Shown below.

This then tells the “character” on the screen what to do, so your character mimics your real-life movements.

You can play bowling, boxing, baseball, tennis, or even golf against the computer or with friends. In addition, you can customize your on-screen character.

Studies have shown that the physical exercise offered by Wii Sports and other “exergames” benefits regular players: seniors who played regularly for at least 35 minutes enjoyed improved balance and control.

All the games, consoles and accessories can be found here.

If you’re looking for something with a simple, easy learning curve, then the Yahtzee handheld game might be for you. It’s a small battery-powered device with buttons that are used to roll digital dice.

All of the same rules as standard Yahtzee apply—but with the digital version of the game, you can play anywhere.

Yahtzee can help keep math skills sharp and keep your brain engaged as you score against the combinations on the screen. It’s one of the simplest handheld games for seniors.

Candy Crush Saga has been one of the most popular handheld games for nearly a decade now—and for a good reason.

The colorful game has fantastic graphics and music and increasingly challenging levels.

Unfortunately, the developers of the game, King, have closed its doors to the online portal.

But, if you have a smartphone that can handle the Candy Crush App, then that’s easy to install. Or, you can play a look-alike version on the Nintendo Switch called “Sweet Sugar Candy.”

These are fast-paced games that require players to match three-of-a-kind colors or types of candy. “Wild cards” or bonus items allow you to create super combinations for extra points.

Sweet Sugar Candy can help with logical sequencing, decision making, and pattern recognition, making it one of the best video games for seniors. Give it a try!

This deceptively cute game is actually a strategic challenge: You must defend your home from zombies who are ready to devour your brain – nice.

You win by strategically placing various plants on the board, which requires concentration, decision-making, critical thinking, and planning skills.

You can play this game on the Nintendo Switch, which has a lot of challenging and fun handheld games for seniors.

Sudoku is a number puzzle game. It ranges in difficulty from easy to extremely difficult. While it can be done with pencil and paper, many digital versions are available. You can play it on your phone, tablet, laptop, or desktop.

Research has shown that Sudoku and crosswords are associated with helping the brain stay sharp. So why not have fun and keep your brain engaged at the same time?

I’m afraid I buy the daily paper 3 or 4 times a week just for the Sudoku. Yeah, I know I can buy a book of them but it’s not the same is it?

The electric Sudoku’s come as phone apps, often free, just search in your app store or an expensive way but one free of ads and other interruptions is something like the Sudoku Illuminated Electronic Mega screen. I think there are cheaper ones available.

Minecraft is a “sandbox” game, meaning it is open-ended, and there doesn’t have to be any “point” to the game.

You can build an entire world. Explore pre-made worlds. You can mine, farm, build, and engage in animal husbandry. You can play it for the sheer fun of making things, or you can play it in survival mode and survive against the onslaught of monsters, food scarcity, and natural disasters.

You can download it as an app for your tablet or smartphone or play it on the Switch. Not sure of where to start?

Ask your grandkids—they’ll probably be able to tell you all about it! (Just prepare to listen for a while. Maybe even for hours. 🙂

If you have the time and patience it can be played on most platforms and operating systems.

Animal Crossing is a simulation game where you build a town full of friends.

You are the mayor of a town and make decisions that affect your fellow villagers. To do this, you will use currency to buy things and improve your town.

You can even play with others and visit their towns!

This game will help boost creativity, social interaction, and critical thinking skills. You can play the most recent version, Animal Crossing: New Horizons, on the Switch.

You will need the recent Nintendo Switch console. It’s a bit of an outlay so it’s a good idea to check out the games apps available on your phone. But don’t forget the console versions are just light years ahead in terms of quality, design and innovation.

Much like Sudoku, crosswords and Scrabble-like games can keep your mind sharp as you age.

One of the most popular word games available today is Words with Friends. You can play it on your smartphone or tablet.

This game challenges you with different word puzzles, asking you to play against your friends (or a random person that the game matches you with) and trying to score as many points as you can for each word.

Keep your vocabulary sharp and your math skills honed with this accessible, fun app.

Super Mario Bros has been around for over 35 years and has proven to be one of the most popular and successful game franchises of all time. You can play as Mario or Luigi, traveling through levels of increasing difficulty to rescue a princess.

There are so many versions of this game, but we recommend trying the new Super Mario Bros. U Deluxe for the Switch. This game will help you improve your reaction time and decision-making skills!

You will need the recent Nintendo Switch console.

As you can see, gaming is no longer just for kids and teens. People of all ages have come to enjoy playing games, and seniors are one of the fastest-growing groups of gamers.

Whether you’re a fan of puzzle games or you are interested in staying active with exergames, there’s something for everyone on this list.

Just a few of the benefits for seniors include:

And overall improved brain function. We have more on “ways to improve brain fitness for over 50s”.

What Should I Look for When Choosing a Game?

It depends on your gaming goals and what you enjoy. As discussed above, computer games for seniors can offer physical as well as cognitive benefits.

But there are other things to consider as well. For example, you may play for social reasons, to maintain contact with friends and family.

If this is the case, you’ll need to select a game that your friends and family members have access to, including the system (such as the Switch, Wii, or mobile device).

Or, suppose you’re playing games to increase your physical mobility. Then you’ll need a space to set up your game where you’ll have ample room to move around.

Other things to consider include:

Many older adults wonder if it’s worth investing in games for seniors. They worry they won’t be able to learn how to play or that they won’t be any good.

It all seems to start in middle age, doesn’t it? The almost immeasurable decline in our mental abilities. We have looked into the business of, so-called, middle age in our article on what is considered to be middle age?

But it’s never too late to learn—check with your grandkids to see if they have tips, or look at your local library or community center for programs where teens teach older adults about technology.

And don’t forget the added potential benefit of meeting new people who also find interest in learning how to play electronic games.

Now that you know how beneficial video games for seniors can be, why not try a few of them yourself?

Whether you want to play to keep your mind sharp or you want to improve your socialization with other seniors or family members, these electronic games for seniors have a lot to offer.

Did you like the article? If so, great! We’d appreciate you sharing it with your friends and family!