Skip to content
When Is It Time To Replace Workout Shoes According to Experts
Updated on February 12, 2022
Written by Penny Cooper 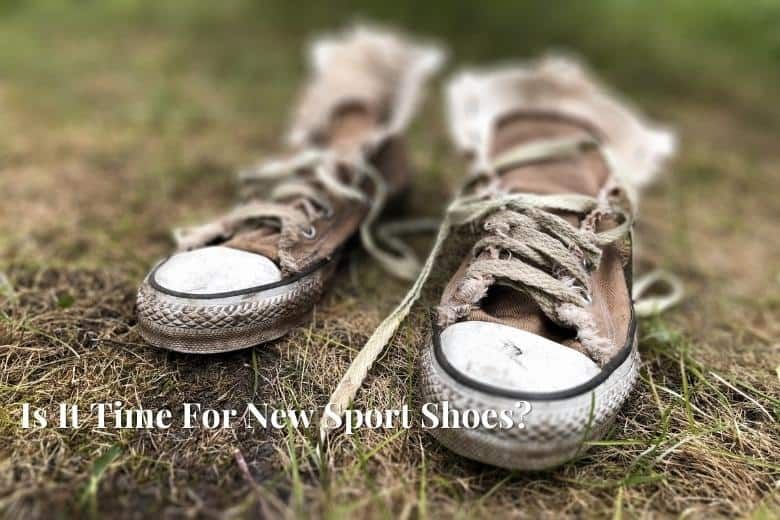 We all have that one pair of shoes that we wish we had bought three pairs of. And there may be a solution.

Perhaps you love the feel of them, but it’s time to examine those telltale signs.

Maybe you’ve been working out more as of late, and they are losing the rigidity and comfort they once had.

Everyone’s feet and gait are different. All shoes have to be laid to rest sooner or later. So when should you replace your sports shoes?

How Long Do Athletic Shoes Last?

Many folks try to assign their footwear an approximate lifespan in months or years before they shop for new ones, but it’s more nuanced than that.

Prematurely discarding your favorite pair is a waste of money, and hanging on to them for an extra month or two can be bad for your feet.

A far more accurate measure of your shoes’ lifespan is how many miles they have traveled, and most experts suggest replacing a good pair of running shoes around the 300–500 mile mark.

While this is more accurate than an arbitrary timeline, there are still a handful of other factors that affect the lifespan of your footwear.

For several years I was consistently getting four months of wear out of an average running shoe, generally wearing Asics or Brooks, two of my favorite shoe brands.

At my leanest, I was running more while putting less pressure on the shoes.

After putting on a few pounds (a lot), the shoes would last the same four months, but at this point, I was running less on pavement and using them more in the gym and at the squash court.

What was the takeaway from this experience? It’s no use asking how often you should replace your walking shoes because a multitude of factors contributes to the lifespan of your footwear.

How often you replace athletic shoes will depend on your walking and running style, weight, foot size, and whether you are exercising in a gym, on a surface that gives like a treadmill, or on the pavement.

When To Replace Your Running Shoes

So you’re approaching the 300–500 mile mark with your favorite pair of runners. There are several telltale signs that shoes are nearing the end of their life, and one of the most common is a loss of the “bounce” feeling we get with brand new shoes.

This is a major indicator that the midsole of the shoe is on its way out. Replace running shoes when the midsole is looking compressed. The midsole is the layer between the uppers and the outer sole (where the tread is).

Visual indicators like worn rubber or stretched and damaged cloth are more common signs of wear on the outer edges of your footwear, so check for this often even if the midsole still feels comfortable.

Remember that some activities will affect your shoes’ lifespan more than others. Hill runners, for instance, may wear out the toe area of their running shoes more than a heel striker.

So begin checking for signs of wear after three months or 300 miles to be safe, even if you end up getting many more comfortable miles out of them.

For me, every day is a day to buy new running shoes but better sooner than when your worn-out shoes have had it.

When Should I Replace My Everyday Walking Shoes?

So we know when it’s time to inspect the shoes we workout in, but how often should we replace walking shoes?

The length of time everyday sneakers will last vary more than that of purpose-built athletic shoes, but many of the same indicators can tell us when it’s time to kick them to the curb (so to speak).

Walking shoe wear can sneak up on us since walking tends to be lower impact than running or hitting the gym.

If you have high-quality shoes or alternate a few different pairs as we will discuss shortly, don’t be surprised if your footwear lasts up to a year. If that’s all you’re using them for.

That being said, we tend to take comfort more for granted when walking than when vigorously exercising, so if you feel any pain in your heel or arch, it is time to inspect the bottom of your shoes.

Check out our article for more on the difference between Running, Training and Walking shoes.

I know my shoes wear at different rates. Tending to overpronate on one side my left foot strike is more pronounced when running. I managed to rectify this by getting neutral shoes and getting some orthotics measured. My trail shoes – yes, different shoes – also suffered and I found myself needing to get new shoes a bit too often

How To Get The Most From Your Sports Shoes

Now that you know when to replace your running and walking shoes, it’s time to discuss ways to maximize your shoes’ longevity. If you own a pair of shoes specifically suited to running and one mainly used for walking, you are already well on your way.

Right Shoes For The Job

I’m guilty as the next person to train in a pair of shoes and then wear the same pair out casually. With running shoes especially it’s important to keep those just for running. Try not to wear the same shoes for different activities.

It has been shown in studies that rotating running shoes helps avoid injuries and increase performance. I would say that this is much more relevant when it comes to more serious athletes although I started doing it about 10 years ago when I was averaging 50 miles week and I felt that it helped.

Rotating running shoes means the slight differences in shoe fit trains the body to negotiate the experience better and secondly, it gives time for each pair of shoes’ midsole to decompress.

Correct Size For The Right Fit

Another step to take before bringing a new pair of shoes home is to make sure they are a good fit. A poorly fitting shoe will wear faster, alongside potentially causing you foot problems in the future.

Saying Farewell To Those Favorite Shoes

If you’ve gotten the absolute last few steps out of your running or walking shoes, you may want to know how to dispose of them sustainably.

Several companies, including Nike, are offering shoe recycling of all brands in an effort to increase sustainability.

We have more on the subject in our article all about recycling running shoes.

How often should you replace your athletic shoes? You now have a good idea of when to check on them, and if you’re tracking your miles, it’s a bit easier but you still need to check, especially for excessive wear.

Alternate your favorite pairs based on their intended uses, and try to recycle once they’ve reached the end of their lives.

We have also covered running shoes for the older adults best shoes for balance and much more.